Calgary resident nets $250,000 as first winner of THE BIGGER SPIN 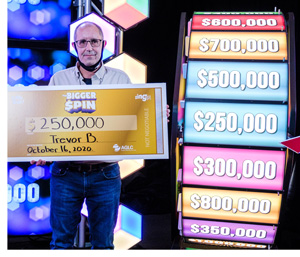 Trevor Bara had to wait a few weeks to see what his birthday gift would be – last Friday, he got the answer as he stepped up to THE BIGGER SPIN prize wheel and netted himself a $250,000 windfall!

The Calgary resident found out last month on his birthday that he’d be the very first person to spin THE BIGGER SPIN prize wheel after he picked up a winning ticket from the 7-Eleven at 815-2335 162 Avenue SW in Calgary.

THE BIGGER SPIN is a new offering from the Western Canada Lottery Corporation that’s modelled after the popular THE BIG SPIN Zing ticket with one major difference; it’s…well, bigger. With prizes available of up to $1 million, the $10 THE BIGGER SPIN ticket lets players win cash prizes in the same way as with a regular scratch ticket, or they can also uncover a “Spin Win” and discover their prize through an animated prize wheel at their local Lotto Spot retailer. If their Spin Win reveals “The Bigger Spin,” they have a shot to spin the big prize wheel to determine what they’ll take home.

Bara initially found out about his win after scratching his ticket, revealing a Spin Win, and stopping in at a local store to see what he’d got on his Spin Win.

“I’ve been buying tickets for 30 years, but I’ve never won more than $100 before,” Bara noted during his initial prize claim, adding that he picked THE BIGGER SPIN tickets because they were new. “I was expecting maybe $20, but this…was a really nice birthday gift,” he chuckled.

Bara, who retired recently, says that his winnings will help make sure he’s comfortable – beyond that, he’s not sure how he’ll earmark his windfall.

“I don’t know exactly yet what I’ll do – there’s no immediate plans,” he said. “I just retired so this is some security for me – it’s great.” 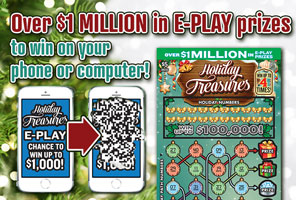