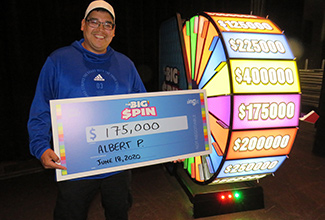 Albert Paupanakis was overcome with emotion when he thought he had won $10,000– but what he didn’t realize was that he was about to win a lot more. The Winnipeg resident’s THE BIG SPIN ticket had actually won him the game’s top prize: $10,000 plus thechance to spin the game’s prize wheel.

After spinning the prize wheel, Paupanakis took home an additional $175,000!

Paupanakis bought his winning ZING ticket from the Gladstone Co-op store while travelling through Gladstone.

Paupanakis said his windfall will let him fulfill a dream of becoming a homeowner.

“I’ve never had the opportunity to buy a home,” he said. “This changes my life.”