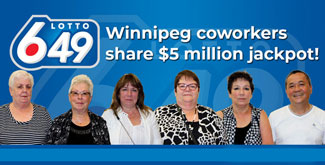 Six nursing home coworkers are celebrating the biggest lottery win in Winnipeg in over a year.

“It’s unbelievable – it still doesn’t feel real. I feel like I’m dreaming,” said Saltel, who claimed the prize on behalf of the group.

Saltel was also the one to purchase the winning Quick Pick ticket for the group the day before the draw at the Dakota Family Foods at 1099 St. Mary’s Road in Winnipeg. It’s something she’s done for the group every week for the ten years they’ve been playing together.

“Every Friday, my homework is picking up the tickets,” she laughed.

Saltel said that even after playing together for so long, it was an uphill climb to convince everyone else they’d won after she checked the winning numbers online after the draw.

Saltel said the win was especially meaningful to everyone in the group after a stressful few months as nursing home staff during the COVID-19 pandemic.

“It’s just kind of a relief – you don’t have to worry so much about other things,” she said. “It’s an easier feeling.”
Saltel said she plans to use her windfall to help out with her upcoming retirement, and said other members of the group will be doing the same: helping their kids out, and spending some on home renovations.

“It’s amazing,” she said. “One day things are normal, and the next day everything changes.”