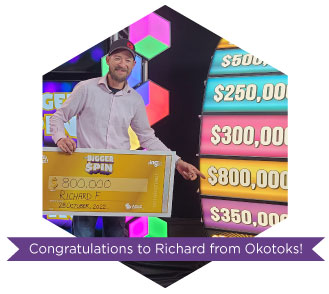 October 28 was a big day for Richard Ford of Okotoks. He took his turn to spin the BIGGER SPIN wheel and brought home a massive $800,000 prize!

THE BIGGER SPIN is an instant ticket with one big difference; not only can players win cash prizes in the same way as with a usual instant scratch ticket, they can also uncover a ‘Spin Win’ and discover their prize through an animated prize wheel on the screen at their local Lotto Spot retailer.

If the player’s Spin Win prize reveals a ‘Big Spin’, they win a $10,000 initial prize PLUS a chance to spin a real wheel at their very own spin event. A BIGGER SPIN winner will spin the wheel to win a prize of $200,000 up to $1 million.

Ford purchased his $10 BIGGER SPIN ticket back in July from the Country Mercantile at 21273 Wye Road in Ardrossan.

He discovered his win immediately after when he scanned his ticket using the self-checker and patiently waited until October when the next spin event was scheduled.

“It feels a little light,” Ford joked after he received his cheque.

The winner said he plans to use his recent windfall to pay off debt and take a trip, but there’s one place he wanted to stop on the way home.

“My wife and I are going to stop at the Harley store,” he said.

“It’s nice not to have to worry about finances for a bit,” he added.