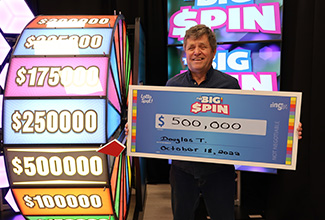 The Winnipeg local received a BIG SPIN instant ticket as a birthday present and said he “couldn’t believe his eyes” when he scratched it to discover he’d be getting the opportunity to spin a prize wheel for a shot at up to half a million dollars.

THE BIG SPIN is a $5 scratch ticket with one significant difference: not only can players win cash prizes in the same way as with a regular scratch ticket, but they can also uncover a “Spin Win” and discover their prize through an animated prize wheel at their local Lotto Spot retailer.

On October 18, Taylor stepped up to spin the BIG SPIN wheel. He spun and was shocked when he landed on the game’s top prize; a cool half-million dollars.

When asked what he’d do next, Taylor had a couple of answers – some more pragmatic than others. “Jump up and down a few times,” he chuckled. “And go pay for parking before it expires.”

“We are going on a nice little cruise,” he said. “This makes it all that much sweeter.”

Taylor’s winning ticket was purchased from Roblin Esso at 5198 Roblin Boulevard in Winnipeg on August 5.