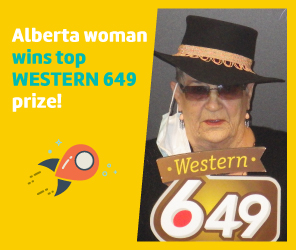 Audrey Williamson got a funny feeling when she started checking her WESTERN 649 numbers. The Rocky View County local soon discovered she won $2 million on the July 24 draw.

“I checked my numbers on WCLC’s website,” she said while claiming her prize. “I matched the 2, then the 9 and the 19, and I knew right then that the rest of the numbers were going to match as well.”

“I was really surprised,” she continued. “But a part of me knew I won the main prize after matching the first three numbers.”

Williamson said she hasn’t made any major plans for her winnings just yet, but she has a couple ideas for some time down the road.

“I think I’ll share the majority of the win with my family,” she said. “I’ve been thinking about getting a newer car at some point too.” “But I won’t be buying a new vehicle… lottery winner or not, they’re way too expensive!”